Heaven holds its own inimitable image in the imaginations of nearly everyone. Some believe in a God, or Gods, or maybe for some it is just a castle of clouds with no omnipotent power. Then there are those that believe there is nothing after death, just darkness. But, the commonality behind these myriads of perceptions is that one believes, or desperately hopes, that the human soul is too complex and beautiful to be snuffed out as suddenly as death comes to take us away.

There is most certainly life after death, and the artist knew this better than anyone. When he was in his youth, he found himself being whisked away from earth to live and dance among the stars. But, to diminish a child’s vivacious spirit is one of the most arduous tasks imaginable. Thus, he was given the duty to create art in the sky, to allow his creative essence to live on when he could not.

He was a painter and his canvas was the sky. He painted with lavenders and lilacs and corals and crimsons. He embellished his masterpieces with the deep glow of the moon or the radiance of sun beams. Every dawn and dusk, when the sun and moon tried to catch just a momentary glimpse of each other, the artist waltzed across the sky placidly placing his plethora of pastels in endless, expendable patterns. Splashes of watercolors rippled under his delicate touch like a tranquil, mirror-like pond under the influence of a stepping stone. Whenever you gaze up towards the heavens and find yourself marveling at their magnificence, you can thank the artist and his talent.

At first, he limited himself to strictly blue and black — no in-between. Only day and night – no dawn or dusk. He did not consider that he possessed the potential to create anything more, until he noticed her. She changed everything. The artist’s brush strokes could learn a lesson about elegance from this girl’s manner. His pastels envied her subtle beauty. His paintings would be honored if she would indulge with them the secret of taking someone’s breath away so effortlessly. He wished his art could mimic even an infinitesimal fraction of her beauty. The artist was numbly enthralled with her. He longed to be with her, to hear her voice, to embrace her. To be a world away from the one he desired the most was heart wrenching, but it added great fuel and passion to his art. Then, and only then did the artist begin to paint with rolling tapestries of colors at daybreak and nightfall. This is the moment when his work went from mediocre to prodigious.

No photograph or other individual could accurately recreate his artwork. It was unparalleled, thanks to his muse. His deep fuchsias faded into soft, subtle lavenders emphasized against a teal backdrop. Rosy pinks and tangerines battled for dominance over the sky but intertwined themselves in the process. This all cascaded over mountains so surreal, they also appeared painted. He did this all with the intention of evoking a tug on the heartstrings of his muse. He created works of art so incredibly vibrant that they made the entire world light up with color.

At the edge of every night and day, his muse gazed upwards. Yet, she seemed apathetic to his exquisite murals. Her countenance appeared almost melancholy, oddly enough. The artist told stories of splendor and vanity and tales of nature and scorn through his bold impressions. But still, the work remained unnoticed by the one it was painted for.

One faithful day, many years later, the muse had the flame of life extinguished from her palms. She passed from her earthly figure and became part of the earth. She rustled through painted autumn leaves and blades of grass until she resided in the sky over seas of clouds. She took her rightful place in the heavens with the artist. The muse’s spark lit once again when she encountered him. A bittersweet feeling fell upon the artist. How joyous he was to have her with him finally, but how terribly sad it was that they had to meet in the afterlife. After the artist edified her on what his role in the cosmos was, and professed to her his inspiration for his work, she muttered two little words that tugged on the artist’s heart strings so forcefully they snapped.

I am a just a 5'0, eccentric, loud feminist that wants to see the world become a better place. I am currently a student at the University of Utah where I am studying french and psychology. I am passionate about the environment, theater, and traveling. At the moment I am working in childcare and I love every second of it. I hope you enjoy my writings, and most importantly I hope my pieces make you feel something. 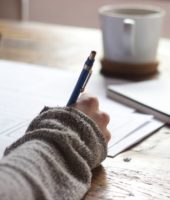